It was our first day in Hawa 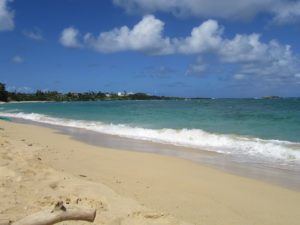 ii and in the afternoon we decided to walk to the beach from our hotel – the Courtyard Marriott Oahu North Shore. We had a nice view of the ocean from our second-story hotel room, but we couldn’t see the beach itself and were anxious to check it out. So we rented some beach chairs (very affordable by the way) at the cabana stand at our hotel, and in less than 5 minutes we were on the beach. We were pleasantly surprised to find it open and vacant. I mean how often do you get an entire beach on the ocean to yourself?

We set up our chairs near the grassy path to the beach and got out a couple good books, and started to wind down from our hectic day before getting on and off three planes to get there from the East Coast of the U.S.. I noticed right away that the Pacific seemed wilder than the Atlantic. The waves seemed stronger and more erratic, and the water much bluer as well. The other thing that struck me was that there weren’t any seagulls flying around. In Googling this, I learned Hawaii has no seagulls – it also has no snakes by the way.

Even though it was around 90 degrees that September day, it didn’t seem hot because of the steady breeze blowing across us. The sound of the waves was calming, and in the distance to the north, we could see waves crash on the giant log-shaped rock near a point. I later learned this was La’le Point. Toward the south we had a lovely view of small mountains, also in the distance.

And in the couple of hours that we lounged on the beach, we only saw a few people at all. Far down the beach, there were two or three people walking, and another couple also came down from the main path to take a walk. There was also a resident from one of the nearby houses, who appeared to be a native, who walked out into the water carrying a little boy. He stayed there with him for a long time, walking and dipping down into the water, while the boy held on to his neck. This appeared to be a father and son, the father patiently letting his son grow accustomed to the water, in a routine that perhaps he’d repeated many times before.

At some point, an older Hawaiian woman, maybe part Japanese, with a group of women from her family — her daughters and granddaughters — came down the path to the beach near us, and they all began tossing beautiful pink orchids into the ocean. They asked if we would take a photo. I got up from my beach chair and went over, and they huddled together, some embracing, while I snapped off some photos on a phone that one young woman handed me. 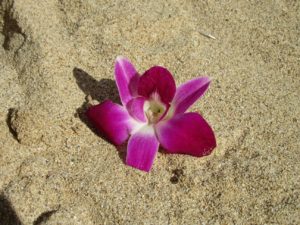 r lady explained to me that a couple years before, her husband had passed away. She said he had been cremated and they’d come down to the ocean and tossed out his ashes at this spot. And now, every year they come back to throw flowers into the ocean as a remembrance and celebration of his life. They seemed happy. I asked the woman if I could have a flower, and she gave me one, which I’ve pressed in a book.

Between the young boy with his father and the older woman with her children and grandchildren, I realized that Hawaiians have a special connection with the ocean which they seem to carry throughout their lives, and perhaps even beyond. Being a girl who grew up next to a river, I could very much relate to this.