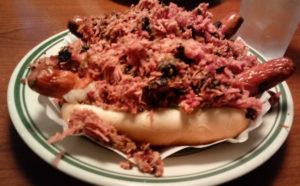 We were driving around Norfolk and Virginia Beach recently checking out flea markets and antique malls and found this place tucked away in an unassuming shopping center off Virginia Beach Boulevard. We paused and almost stopped in a trendy looking place in the same shopping center, but decided to go a little farther, and one look at the kitchy signs on the front window and we knew we had to try the Route 58 Delicatessen.

Once we were inside and got a good look at the menu, we knew this was a good pick. It was just the sort of place Guy Fieri would feature in “Diners, Drive-Ins and Dives” on the Food Network. It was a true New York deli with everything you’d expect to find in one  – from knishes and potato cakes to chopped liver and bagels with salty lox.  After looking at the menu, we had to try the corned beef and pastrami, for which we learned they are well known. 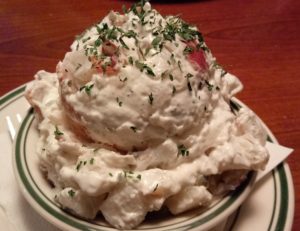 The meats were perfectly cooked, everything was delicious and the service was fast and friendly. Our only complaint was that we had no room left to try a dessert and the cheesecakes and other desserts looked amazing. The portions were so large that we ended up taking out enough for a least one more meal, maybe two. This is one place that we definitely want to visit again.

THE NITTY GRITTY:
The Route 58 Delicatessen is open for lunch and dinner 7 days a week.  It is located at 4000 Virginia Beach Boulevard. Prices are affordable – we give it $$ out of a possible $-$$$$$. Visit the deli’s website at http://www.58deli.com/.